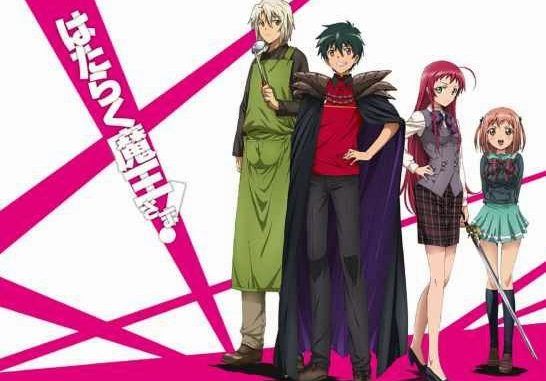 Synopsis Striking fear into the hearts of mortals, the Demon Lord Satan begins to conquer the land of Ente Isla with his vast demon armies. However, while embarking on this brutal quest to take over the continent, his efforts are foiled by the hero Emilia, forcing Satan to make his swift retreat through a dimensional portal only to land in the human world. Along with his loyal general Alsiel, the demon finds himself stranded in modern-day Tokyo and vows to return and complete his subjugation of Ente Isla—that is, if they can find a way back! Powerless in a world without magic, Satan assumes the guise of a human named Sadao Maou and begins working at MgRonald's—a local fast-food restaurant—to make ends meet. He soon realizes that his goal of conquering Ente Isla is just not enough as he grows determined to climb the corporate ladder and become the ruler of Earth, one satisfied customer at a time! Whether it's part-time work, household chores, or simply trying to pay the rent on time, Hataraku Maou-sama! Presents a hilarious view of the most mundane aspects of everyday life, all through the eyes of a hapless demon lord.

[Written by MAL Rewrite]. Overall 5 Story 5 Animation 7 Sound 4 Character 5 Enjoyment 5 I'm well aware this isn't going to be a popular review, so go ahead and downvote it just because I gave it a 5/10, but at least listen to why first, because someone has to shatter the illusion that this was actually a good show. The basic premise of the show is that the overlord of the demon army and one of his generals are attacked by the hero during a large scale war to take over 'ente isle'. They attempt to temporarily retreat to an alternate dimension, but find themselves trapped in modern day japan and are unable to return. So must work menial jobs to survive while they attempt to find a way to recover their powers and return to ente isle.

It's a solid premise that's fairly original and had a lot of potential, but ultimately failed in its execution. I know what your thinking, the main character of the show is a demonic overlord trapped in human form, working in McDonalds. So we'll get an evil anti-hero with dark tendency's who goes on to become good, accepting human values, and seeking reconciliation for his dark past. El dvigatelj sd 10 podklyuchenie. But instead we get your typical self sacrificing 'emiya shiro' right from the get go. He becomes your generic harem/action protagonist, and never displays any regret over his past actions despite this. As such Maou gets no concrete development over the show, and the fact that he is a demon has no relevance to his personality whatsoever. The show then goes on to introduce more and more female characters to the point where it becomes a slice of life harem with a little action and comedy scattered throughout. We also see scenes from ente isle but bizarrely there are no demons present at all, despite being on the verge of conquering the entire world before Maou left they apparently just got up and left.

Most of the 'plot' starts feeling like filler after each of the characters is introduced which ultimately meant they ran out of time to develop any real closure on the romance side. Making the ending feel like a half season break, rather than a satisfying end to the show. So you'll have to wait at least another year for season 2 to get any closure. The comedy starts off okay but there was never really enough of it to sustain the show purely on laughs, and as the show goes on the comedy becomes less and less frequent and much more repetitive (oh we are so poor, that's still hilarious the 1000th time we've heard it) The opening isn't present for the first two episodes, because when it is finally introduced it just recycles footage from the first two episodes. The music in the show isn't awful, but it certainly isn't a selling point for the show. The art is of the same high quality we've come to expect of modern anime but doesn't do anything exceptional in that regard.